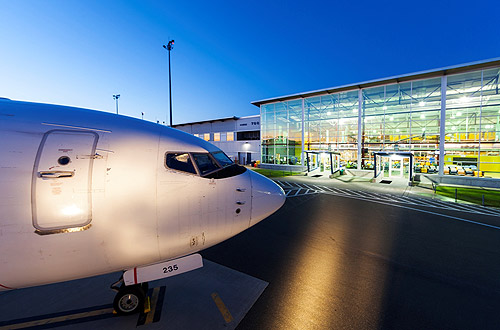 The Comox Valley Airport was pleased to report a seven per cent increase in passenger numbers for the first quarter of 2015 at its Annual Public Meeting. New capacity and improved scheduling with WestJet were responsible for the majority of this growth and YQQ expects to see passenger numbers continue on an upward trend with the addition of Air Canada's new service to Vancouver.

"We expect to see many more passengers using the terminal over the next year thanks to air service improvements implemented in 2015," said Bigelow. "This translates into a positive economic benefit for the community."

The increased capacity from WestJet includes an early morning departure and late evening return with the Q400 aircraft. The new schedule ensures a minimum of three daily non-stop departures from Comox to Calgary at any time of the year, as well as increased service throughout the summer. The additional flights and schedule improvements opened up about 14 additional WestJet markets that were previously not served from Comox in at least one direction.

"This new Air Canada service provides access to destinations around the world starting right from Comox," said Bigelow. "Passengers can enjoy the convenience of checking in for their flight at our airport and then seamlessly connect to destinations in Asia, Australia, Europe and across North America, all on the same ticket."

While the Comox Valley Airport believes a case still exists for non-stop service to the United States, Bigelow explained that some of that demand can be filled by Air Canada and WestJet. It will take some time to determine how well needs are being addressed, but in the meantime Bigelow says the best way to bolster YQQ's case for new service is to use the services that we have now.

"Air Canada and WestJet have responded to our request for additional frequency and improved scheduling into their hubs. This will help our passengers connect to more destinations and now we must do our part by filling up these planes," Bigelow explained.

In addition to growing passenger numbers, the Comox Valley Airport reported a successful fiscal year, with a three per cent increase in revenue to $4 million and a one per cent decrease in expenses to $3.2 million for 2014/15. YQQ also reported a healthy surplus of $816,925.

"Our terminal fees remain at $5.00 per passenger which places us in a very competitive position to attract a new carrier. We have been able to keep our fees low, while saving for future land acquisitions and terminal improvements," explained Bigelow.

"As the board completes the update of our strategic plan, we will be reviewing our Master Plan to determine the capital requirements in the coming years," said Frank van Gisbergen, Chair of the Comox Valley Airport Commission. "We are pleased with YQQ's financial performance in 2014/15 and we are confident it will continue to maintain a healthy financial position in the years ahead."

Further details on YQQ's goals, objectives and achievements can be found in the 2015 Accountability Report posted on the Comox Valley Airport's Website.

The Comox Valley Airport (YQQ) is an economic driver for Northern Vancouver Island, supporting about 193 direct jobs including airlines, airport management, security, food and beverage, retail and ground transportation. The airport and tourism business community together generate $367 million in Gross Domestic Product and $701 million in direct economic output for the community. YQQ is operated by the Comox Valley Airport Commission, which was established in 1996 as a non-share capital and not-for-profit organization to operate the civil aviation facilities, including the terminal and apron at YQQ. The airfield and its associated systems, including air traffic control, are operated by the Royal Canadian Air Force at 19 Wing Comox on a continuous 24-hour basis.