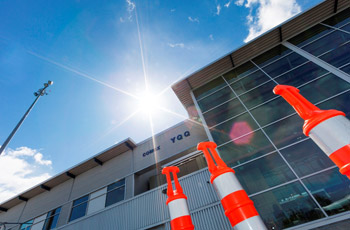 The Comox Valley Airport was pleased to report a record-setting 10 per cent growth in passenger numbers despite economic challenges, including a weakening Canadian dollar and declining transborder travel patterns. Passenger traffic at YQQ reached an all-time high of 351,530 in 2015. The same year oil prices saw a sharp drop, resulting in massive energy sector layoffs which created ripple effects across the country for communities linked to oil patch employment.

Bigelow explained that Northern Vancouver Island residents continued a strong pattern of travel throughout 2015, in particular with the utilization of YQQ's new Air Canada service to Vancouver. The route experienced outstanding growth of 45 per cent since the airline began operating out of Comox in May.

WestJet added Q400 service to Calgary early in 2015, culminating in a 28 percent increase in new seats at YQQ since 2013. The airline did not waver in its commitment to Comox, even as the economy in Alberta weakened. YQQ passengers continued to support the service, adding to growing numbers at the airport as passengers accessed new destinations in WestJet's ever growing network.

Despite double digit growth, the Comox Valley Airport Commission took a cautious approach with finances in 2015/16, recognizing current growth patterns are unlikely to be sustained in the coming years. YQQ reported an increase in revenue from $4.0 million to $4.3 million while expenses increased slightly from $3.2 million to $3.3 million, resulting in a net surplus of $1.1 million.

"It is important that we invest our savings now, for future expenditures like parking lot expansion and building maintenance as our terminal is beginning to show the first signs of wear and tear since its opening a decade ago," explained Bigelow. "We are proud to have one of the lowest Airport Improvement Fees in the country and we plan to maintain that competitive edge by ensuring our future infrastructure needs are planned for in a cost effective manner."

The Commission also unveiled its new five-year strategic plan which included an updated Vision, Mission and Goals for the Comox Valley Airport. The Commission's new Mission has been adjusted to recognize the link between air service and the local economy, and its ensuing Goals focus on air service development, fiscal responsibility, master planning and employee retention.

"Each day we aspire to make the best decisions that we can to ensure the Comox Valley Airport stays financially viable and continues to make positive economic contributions to the community. Our strategic plan helps to steer us on the right path to ensure this will be the case well into the future," said Comox Valley Airport Commission Chair, Frank van Gisbergen.

YQQ's Strategic Plan and 2016 Accountability Report can be found on the Comox Valley Airport's Website at: www.comoxairport.com/publications.

The Comox Valley Airport (YQQ) is an economic driver for Northern Vancouver Island, supporting about 193 direct jobs including airlines, airport management, security, food and beverage, retail and ground transportation. The airport and tourism business community together generate $367 million in Gross Domestic Product and $701 million in direct economic output for the Vancouver Island community. YQQ is operated by the Comox Valley Airport Commission, which was established in 1996 as a non-share capital and not-for-profit organization to operate the civil aviation facilities, including the terminal and apron at YQQ. The airfield and its associated systems, including air traffic control, are operated by the Royal Canadian Air Force at 19 Wing Comox on a continuous 24-hour basis.