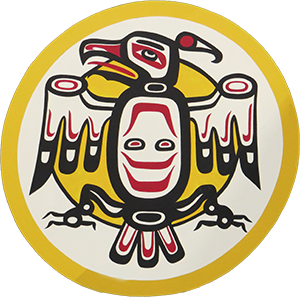 In early 1961, K'ómoks Chief Andy Frank was approached to provide assistance with the design of a new unit badge for the Comox Base.

At that time, renowned carver Chief Mungo Martin was visiting Chief Frank, and the two agreed that Chief Martin would oversee the creation of the badge.

Chief Martin selected a design executed by Campbell River artist, Jim King, featuring the Puntledge emblem of the Thunderbird, and motto "Ai Quanesut", which translates as "Well Able to Take Care of Oneself", interpreted as "By Vigilance Prepared", or as it is now commonly known, "On Watch."

By 1964, the unit badge had received Royal assent, after approval by the College of Heralds in London England, forever linking the base to the K'ómoks First Nation Pentlatch culture.

Although three replicas made the journey to Vimy, David's plane remained in Canada. After a few successful test flights, he donated the plane for display at the Comox Valley Airport. David wished to include the legacy of the Comox unit badge which was added to the aircraft in recognition of the significant contributions of First Nations to the Canadian Forces.

Sadly, Captain Freeman passed away from cancer in October 2019, but his wish to see the contributions of First Nations, and all Canadian veterans be honoured lives on through the installation of his plane.

The Thunderbird Design was re-created by Chief Mungo Martin's great- grandson, David Knox, and now embellishes the aircraft, along with a dedication to Captain David Freeman.